- March 16, 2018
This past weekend we made our way up to central/northern Vermont for one of our most epic trips of the year. We skied 4 ski areas in 3 days, met some amazing people, and drank some of the finest beers Vermont has to offer. And if that wasn't enough, winter storm Quinn was dumping snow the whole trip, making for some of the best skiing conditions of the year.

We partnered with Ski Vermont's Chloe Elliot, who planned the stops and and was an amazing guide, imparting us with all sorts of Vermont knowledge and culture throughout. 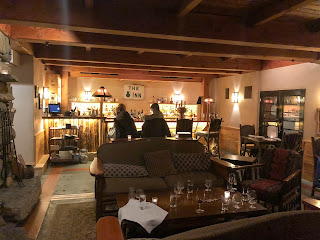 Our trip kicked off on Thursday night for a drink at Tracks Tavern in The Pitcher Inn, just a few miles from Sugarbush Resort. We met Win Smith, president/owner of Sugarbush and Candice White & John Bleh from the communications team. The team was really excited to share that that Sugarbush will be a part of the Ikon Pass for the 2018/2019 season. From chatting with Win it was great to hear how hands-on he is as an owner, skiing over 100 days a year, and committed to making sure Sugarbush maintains the special culture of being single-owner operated.

From Tracks, we headed to Rumbles Kitchen which is located on the Lincoln Peak side of Sugarbush Resort. Rumbles offers a casual dining experience with locally sourced VT ingredients. We recommend the Pickle Brined Fried Chicken as an entree. Also be sure to check out their morning breakfast to get fueled up steps from the chairlift. 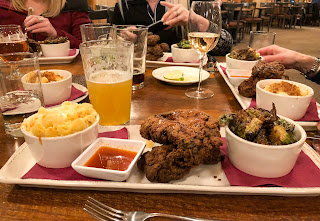 For accommodations we stayed at the Sugarbush Inn, located just a miles away from the slopes. The inn was as charming as it gets-- featuring fireplaces, a wood paneled library, and including a continental breakfast. There is shuttle bus that runs regularly to the mountain as a convenience to the guests.

On Friday morning we hit the slopes and were lucky enough to be joined by Skiing Hall of Famer and Surgarbush's Chief Recreation Officer, John Egan. John led the group down some of Sugarbush's most prized terrain on Lincoln Peak such as Paradise and Organ Grinder. He gave the group some great pointers on how to ski powder and steeps, and had a rolodex of chair lift stories to tell  from his escapades touring the world in Warren Miller ski movies. John regularly books private groups and it's a great way to experience all the terrain Sugarbush has to offer -- just be prepared to shred! 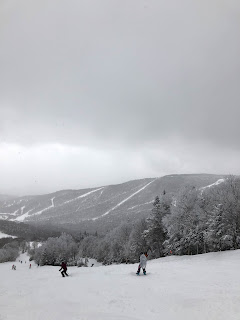 For the afternoon we took the shuttle bus to Mt. Ellen, Sugarbush's Northern most peak. Mt. Ellen features the highest elevation chair lift in all of Vermont and some fantastic terrain. We recommend trying F.I.S. for a challenging run, or take Rim Run to Lower Rim Run to Northstar for a long easier route. If you're hungry be sure to check out Walt's at the Glen House for amazing grilled cheeses and grain bowls. After a memorable day on the slopes we headed to the Castle Rock Pub, to grab a beer and remissness. 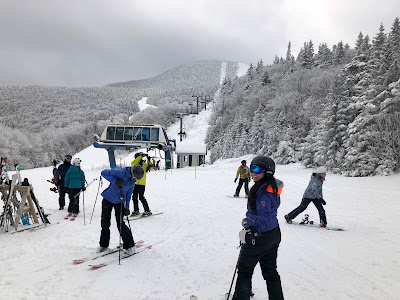 For dinner we had the pleasure of dining at the Hyde Away Inn with Sean Lawson, the man behind the Lawson's Finest Liquids Sip of Sunshine. Sean is currently building a brand new brewery and tasting room in Waitsfield, VT that is scheduled to open some time in the fall. Currently Lawson's distributes to the New England area and New York. It was great to talk with Sean about the brewing process and how much pride he takes in making really high quality beer. For a great meal at the Hyde Away we highly recommend the meatloaf. 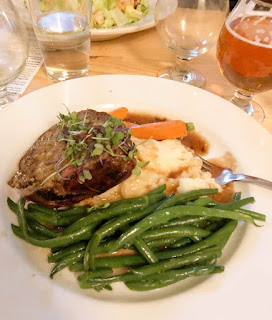 Saturday we made our way 40 minutes north to Stowe Mountain Resort for a morning mountain tour with Communications Director, Jeff Wise. With the acquisition by Vail, Stowe became part of the Epic Pass this year. Jeff shared that this has been a beneficial shift for the customer as the price of a season pass dropped substantially, while also getting to ski the many other reputable mountains on the Epic Pass.

Stowe's Mansfield Peak stands up to some of the most challenging terrain in the East. Additionally all of their lifts run from top to bottom so you get to enjoy full runs every time. Our favorite runs of the day were the challenging Nosedive, and the long and windy Toll Road that zig zags through the wooded area around the ski area boundary. 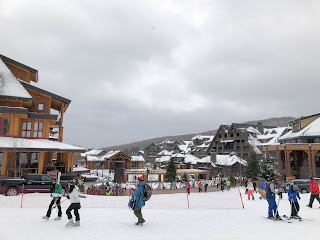 Following the morning on the slopes we went for an early apres ski at the von Trapp Bierhall, where we met Sam von Trapp for lunch. Sam had an electric personality and entertained/educated the group with stories of his Austrian heritage, that became the basis for The Sound of Music. He also gave us a tour of their new 30,000 square foot state of the art brewery, which cranks out 50,000 barrels of beer annually. 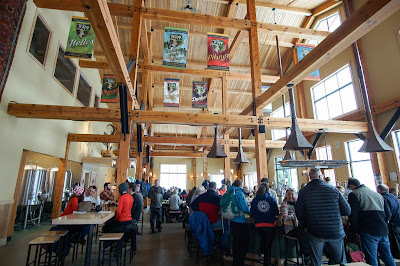 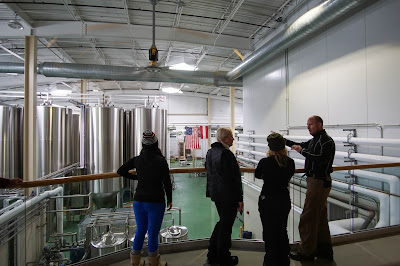 Our favorite of all the brews was the classic Golden Helles Lager. For food we highly recommend trying the radish, pretzel, and cheese soup appetizers, and the chicken schnitzel was an incredible entree 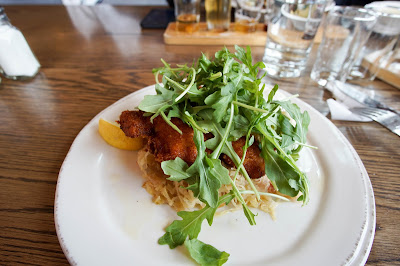 Following a great afternoon with Sam we visited both the Alchemist Brewery (home of the famous Heady Topper) and had appetizers and beers at Idletyme Brewing, both located on Mountain road in Stowe

Saturday night we stayed at the von Trapp Family lodge which features beautiful guest rooms and all the amenities to go along with it. Be sure to check out the hot tub outside the recreation center and grab breakfast at the Austrian Tea & Tap room. We highly recommend the buttermilk pancakes with bacon/sausage, an egg, and fruit cup -- also a favorite of Sam's.

On Sunday we took part in an activity we had never tied before -- cross country skiing. The von Trapp Cross Country Ski Center is celebrating their 50th anniversary this year, and what better place to learn. Our instructor, Larry, got us moving along within 15 minutes of instruction. Its a great sport to pick up at any age, as it seemed far more approachable than downhill skiing. Our technique was far from good, but after a lesson most people should be able to be mobile enough to get around the track. We were even able to venture into the wooded area which was a memorable experience. Overall it was a great time and a hell of a workout. 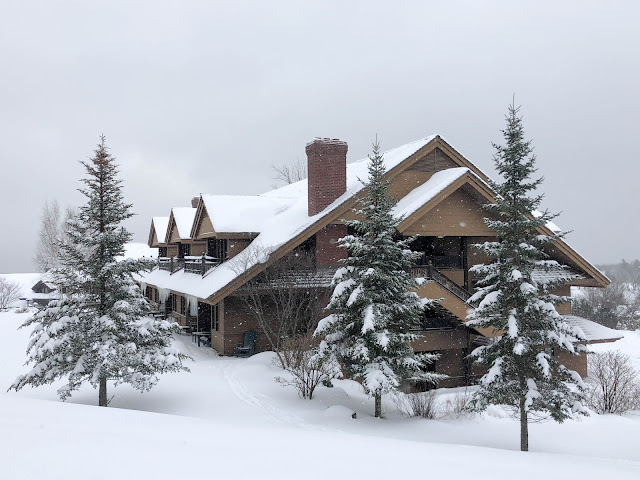 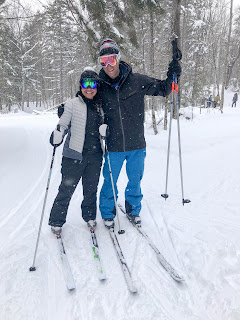 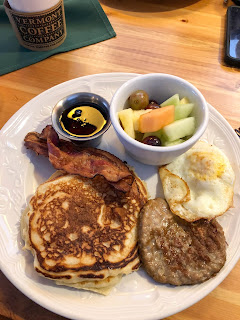 
Mad River Glen has always been on our bucket list. This skiers-only mountain is nestled in the Mad River Valley down the road from Sugarbush.  With their famous slogan "ski it if you can" MRG relies on predominantly natural snowfall and the slopes are meant to be skiied as nature intended. Known for its legendary steeps and glades, there are no bulldozers removing boulders or trees -- it's pure unrefined utopia, especially when the powder runs deep. That being the case, despite being wiped out from xcountry skiing, we stopped by MRG Sunday afternoon to make a few runs.

We asked GM Matt Lillard what MRG's most famous ski run was and he replied, "Paradise" so that's where we headed. To get there we took their famous single chair lift to the summit. While a single chair seems archaic in this day and age, it only adds to the experience. Because only one skier at a time can access the summit, it provides a unique experience of feeling like you just hiked and have the trail all to yourself. It was soon evident why they named the trail "Paradise", as it had everything from steeps, glades, and a frozen waterfall running through the middle of it. I'd put it up there with the most challenging in-bounds runs on the east.

While we only had time to make a few runs it was truly a legendary day at MRG that we'll never forget, and we hope to be back soon to experience the full 51 trails the mountain has to offer.

WOW, WHAT A WEEKEND! 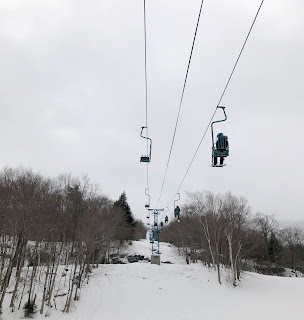 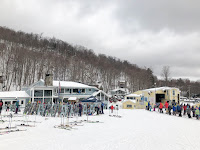 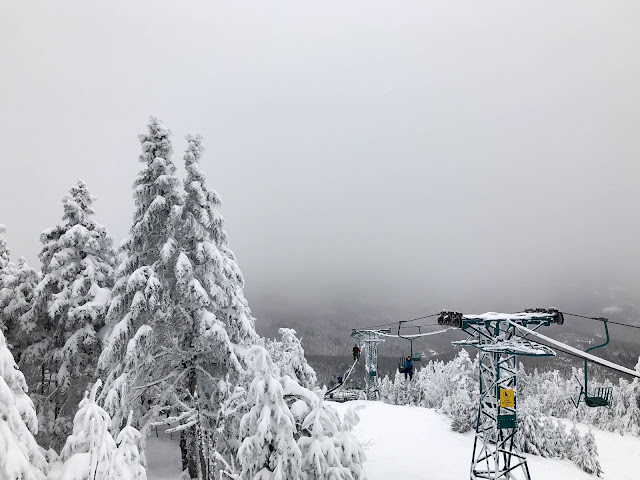 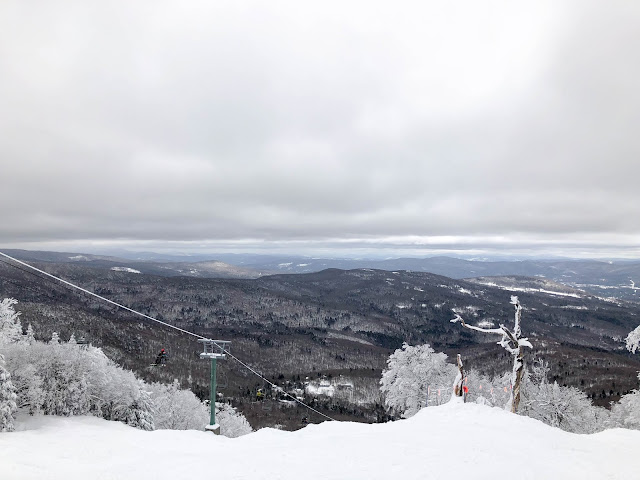